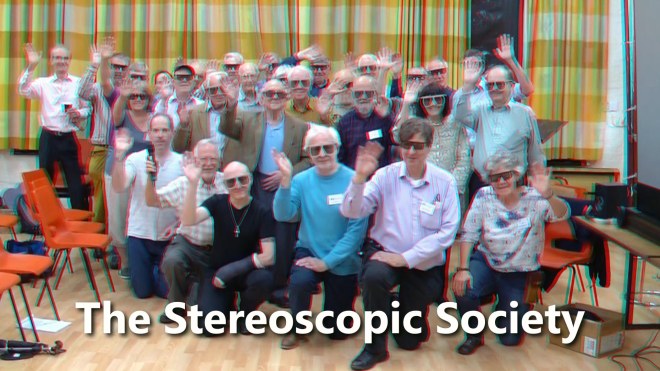 The final film in the ‘Untold Tales’ series

Please put on your 3D glasses because I’d like to give you an immersive tour of a place I love.

Welcome to The Stereoscopic Society. We’re a bunch of 3D enthusiasts who meet once a month in a church hall in Euston. We share tips tricks and our latest 3D photos.

58 seconds probably isn’t enough time to experience how I feel when submerging for the usual full 3 hours at the club, but I hope you enjoy your quick cup of tea, meeting my friends and watching a digital slide show with us.

Ryan Green’s infant son, Joel, is dying from cancer. A developer of apps and indie-games by trade, Ryan and his wife Amy have chosen to tackle their active sorrow head-on by creating a game about their son’s life and suffering. Initially funded by a successful KickStarter campaign, the game launched on 12 January 2016. The painful honesty of this project has made it stand out amongst other gaming experiences. I would go so far as to argue it has more in common with the animated documentaries covered on this blog than with the conventional gaming market. 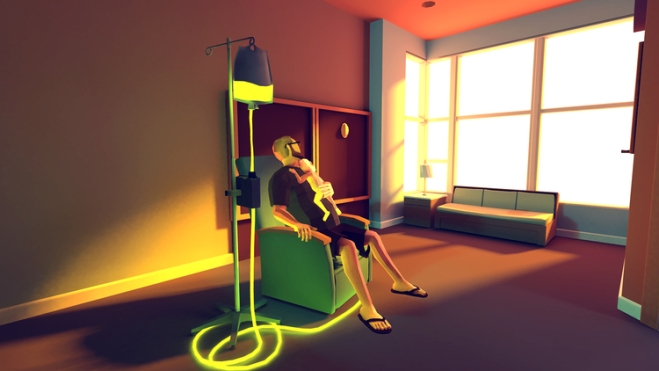 I first heard about That Dragon, Cancer on the Reply All podcast. Further investigation revealed an enormous amount of online media coverage. Wired Magazine has published an extract from the first scene that Ryan conceived, viewable at this link. It is a close reconstruction of a terrible night Ryan spent with Joel. He was forced to accept his limited ability to help his son. From this came the idea of a gaming experience where the player is not necessarily granted influence over the outcomes in the story. The significant absence of control leaves the player with no option other than to accept their fate, and that of Joel.

Christianity strongly influences the Green family’s perspectives regarding Joel’s plight. The game is very much rooted in the tension first articulated in the Book of Job. In essence this ancient text asks why do the innocent suffer? The world being Godless, might seem to be a conceivable answer to a bourgeois atheist like myself, but it is clear that the Green family’s faith and prayers are vital tools that are helping them through this ongoing tragedy.

From an outsider’s perspective, I would argue that there is something more tangible than prayer helping this family; the power of catharsis. This game is the method chosen by Amy and Ryan to address their pain. Every ounce of personal tragedy evident in the game play, is suffering that they are not going through alone; suffering that they have had to pick apart and understand in order to make it communicable to others. I cannot begin to understand what it would be like to watch your child battle with cancer for three years, but this game is the best that Ryan and Amy Green could do to show me.

That Dragon, Cancer is available for purchase and download here.

A hybrid film featuring live action alongside animated documentary, this is the story of Ryszard Kapuscinski, a journalist covering independence movements throughout Africa in the 1970’s.

The animation and style is sublime, building on the style associated with ‘Waltz with Bashir’.

We are not sure when this film will be completed – but we anticipate its release!

You can read the review here:

Dennis Stein-Schomburg’s ‘Andersartig’, the German word for different, is an elderly woman’s account of her isolated youth in a German orphanage during a World War II allied bombing campaign. 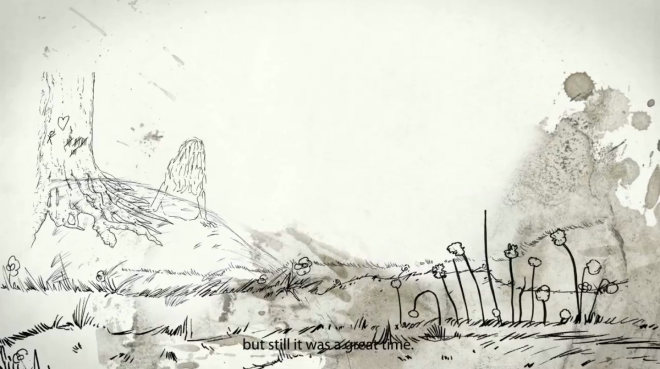 Schomburg captures the visual essence of memory through the use of transparency, a sepia colour palette and floating camera movements that include  slightly conflicting uses of perspective. While much of the composition is left abstracted by splashed ink, these textures provide context for individual details to pop out. Recognition is owed to the director for crafting the feeling that we are experiencing the narrator’s minds eye.

Two and three dimensional animation components are combined successfully. While the image of a fish constructed out of numbers was designed crudely and moves with an equivalent level of elegance, the dispersion of dandelion seeds give a strong impression of air currents. These airborne symbols of childhood innocence serve as an impeccable introductory device to the impending air raid. Their aimless movement and silence function as a counterpoint to the droning intentionality of the aeroplanes set on civilian devastation.

Despite being based on a factual account, this film has a distinctly allegorical tone to it.  The first possible interpretation aligns this narrative with the age-old advice that one’s proverbial eggs should not be placed in the same basket. In case of a chance instance of damage this is a recognised method for preventing the destruction of an entire stock.

The second interpretation I take from this account weighs more on the connection between personality and survival. The title of the film presents a girl’s isolation and separatism as the main theme. Her resistance to following the action of the cohort led to circumstances that left her living while the rest perished. This is an appealing message as there is great value placed on individuality in our society. However, I am not certain it is wise to learn from this little girl’s actions, and by default her anti-social tendencies. If these circumstances were repeated the same results would not necessarily reoccur. This woman’s mere survival grants her decision the illusion of being correct when rationally it is fair to say this chance outcome was the result of numerous arbitrary circumstances. The connection between her personality and survival could be incidental. That said it is important to remember these are simply someone’s memories and any interpretation may say more about us, the viewers, than the narrator. 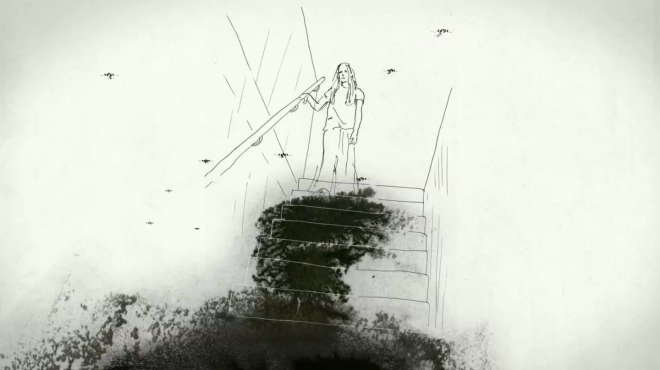 I find it intriguing to compare this film with Alex Bland’s ‘I Dreamt of Flying’, an animated documentary I reviewed for this blog back in June. Bland presents the other side of the story, the accounts of British and American bomber pilots that described raids over Germany. While Bland steers away from the civilian casualties associated with these attacks, there is little engagement with the wider context of war in Schomburg’s film.

‘Andersartig’ was brought to our attention by Florian Maubach, the director of ‘Iki – See you soon’ which I wrote about back in August. Maubach and Schomburg are both students from the University of Art and Design in Kessel. Dennis now works freelance as an animator and graphic designer. 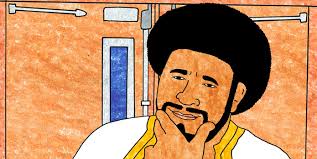 Following the devastation of Hurricane Katrina in 2005 the people of New Orleans slowly began to rebuild homes and lives while trying to process what their community had endured. Lawrence Andrews presents the theatrical retellings of related events by a local man referred to as ‘Noel’. The retelling of his memories are further influenced by the tragic police shooting of unarmed civilians who were crossing the Danziger Bridge six days after the hurricane. This incident left two people dead and four seriously injured. Noel draws upon his personal archive of sound recordings and photographs to prompt a performance of his own narrative, interwoven with those of his community and the bridge victims.

Initially produced in 2008 as an audio essay, ‘OwnerBuilt’ was redeveloped and released this year as an ‘Animated Performance Documentary’. Andrews appears as a character throughout the 49-minute sequence; narrating, contributing editorial notes and analysing the authenticity of Noel’s accounts. Andrews’ dialogue with Noel becomes integral, his presence noticeably influencing the process of documentation. A misunderstanding concerning Noel’s neighbours sparks an account of their plight along with a strange instance where Andrews witnesses Noel talking about him to the neighbour.

Andrews is overtly self-aware as a filmmaker. He anchors the film in the context of a post-documentary age. The audience is handed frequent reminders that we are watching a set of illusions. For instance Andrews declares that Noel’s son is responsible for the sound of a cello being practiced. “Well actually it’s my son, his played sax,” the director declares immediately afterwards. 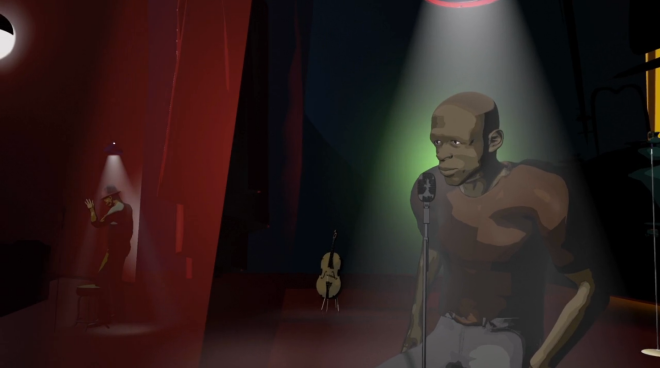 Sound seems much more integral to this film than visuals. Not only is the sequence entirely dependent on spoken word, the sound design is speckled with effects and textures which construct images in the absence of visual stimuli.  While most animated documentaries attempt to augment a narration by visualising the subject matter, Andrews renders himself and Noel on a darkened stage with harsh spotlights. 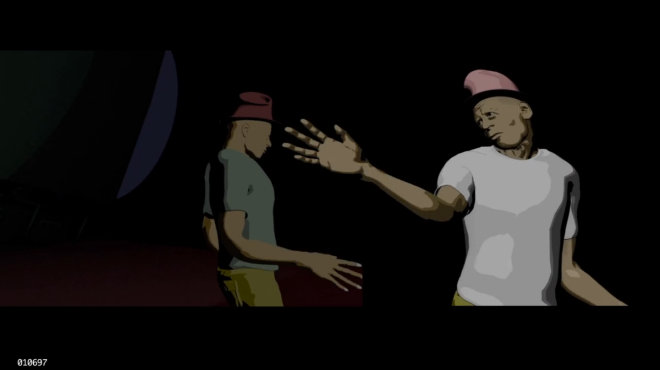 In step with the film’s non-linear structure, surreal aesthetic and confronting subject matter, the characters move with an uncanny jitter. While the lip-synching is often so slight it is barely noticeable, the speakers ceaselessly gesticulate. Their shifting bodies and stiff waving hands swing more vigorously than implied by tone of voice while maintaining rough correlation with emphasis. Lawrence Andrews seems to revel in the artificiality of the medium he has chosen. On occasion characters walk through each other, merging their digital flesh.  While describing the approach of the storm a flock of audience seats spin and float in the auditorium like particles in a snow globe.

Noel’s speeches are almost lyrical; to me this implies an extraordinary aptitude for improvised speech or the possibility of rehearsal or scripting. Andrews addresses the theatrical nature of Noel’s performance in the blurb provided with the Vimeo link: “Presenting the work in what may be deemed a theatrical form has the potential to de-legitimize and thwart its claims for documentary status, but this is a tension I hope the project explores.” 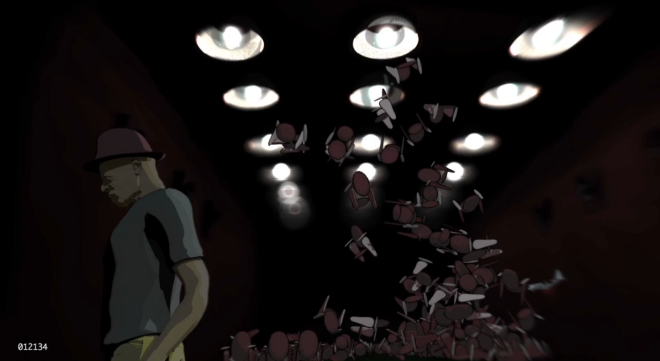 Lawrence Andrews’ Vimeo notes offer good insight; despite using the barely digestible rhetoric of academic arts, the associate professor of film and digital media at The University of California, Santa Cruz, explains thoroughly his intentions, raises questions for further exploration and indicates the contextual framework for his practice.

Samantha Moore brought this film to our attention. Moore is a director of animated documentaries whose work has been discussed a number of times on this blog.

Dole Animators is a group of benefit claimants based in the UK who are working together to make an animated documentary about the reality of the impact of the governments recent welfare reform.

The final film will use a mixture of stopmotion and collage animation.

Animateddocumentary.com’s Ellie Land is working with the group in partnership with Ruth Patrick, a researcher from Leeds University.

The final film will be released in Autumn 2013, you can watch the trailer here: