Following the devastation of Hurricane Katrina in 2005 the people of New Orleans slowly began to rebuild homes and lives while trying to process what their community had endured. Lawrence Andrews presents the theatrical retellings of related events by a local man referred to as ‘Noel’. The retelling of his memories are further influenced by the tragic police shooting of unarmed civilians who were crossing the Danziger Bridge six days after the hurricane. This incident left two people dead and four seriously injured. Noel draws upon his personal archive of sound recordings and photographs to prompt a performance of his own narrative, interwoven with those of his community and the bridge victims. 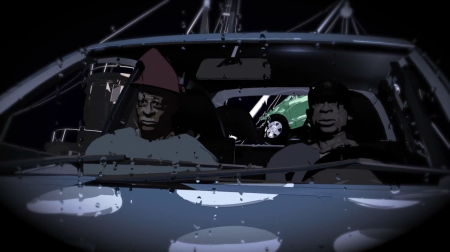 Initially produced in 2008 as an audio essay, ‘OwnerBuilt’ was redeveloped and released this year as an ‘Animated Performance Documentary’. Andrews appears as a character throughout the 49-minute sequence; narrating, contributing editorial notes and analysing the authenticity of Noel’s accounts. Andrews’ dialogue with Noel becomes integral, his presence noticeably influencing the process of documentation. A misunderstanding concerning Noel’s neighbours sparks an account of their plight along with a strange instance where Andrews witnesses Noel talking about him to the neighbour.

Andrews is overtly self-aware as a filmmaker. He anchors the film in the context of a post-documentary age. The audience is handed frequent reminders that we are watching a set of illusions. For instance Andrews declares that Noel’s son is responsible for the sound of a cello being practiced. “Well actually it’s my son, his played sax,” the director declares immediately afterwards.

Sound seems much more integral to this film than visuals. Not only is the sequence entirely dependent on spoken word, the sound design is speckled with effects and textures which construct images in the absence of visual stimuli.  While most animated documentaries attempt to augment a narration by visualising the subject matter, Andrews renders himself and Noel on a darkened stage with harsh spotlights.

In step with the film’s non-linear structure, surreal aesthetic and confronting subject matter, the characters move with an uncanny jitter. While the lip-synching is often so slight it is barely noticeable, the speakers ceaselessly gesticulate. Their shifting bodies and stiff waving hands swing more vigorously than implied by tone of voice while maintaining rough correlation with emphasis. Lawrence Andrews seems to revel in the artificiality of the medium he has chosen. On occasion characters walk through each other, merging their digital flesh.  While describing the approach of the storm a flock of audience seats spin and float in the auditorium like particles in a snow globe.

Noel’s speeches are almost lyrical; to me this implies an extraordinary aptitude for improvised speech or the possibility of rehearsal or scripting. Andrews addresses the theatrical nature of Noel’s performance in the blurb provided with the Vimeo link: “Presenting the work in what may be deemed a theatrical form has the potential to de-legitimize and thwart its claims for documentary status, but this is a tension I hope the project explores.”

Lawrence Andrews’ Vimeo notes offer good insight; despite using the barely digestible rhetoric of academic arts, the associate professor of film and digital media at The University of California, Santa Cruz, explains thoroughly his intentions, raises questions for further exploration and indicates the contextual framework for his practice.

Samantha Moore brought this film to our attention. Moore is a director of animated documentaries whose work has been discussed a number of times on this blog.