Liz Blazer’s ‘Backseat Bingo’ is a joyful exploration of sexuality in the lives of senior citizens. The talking head format is brought to life by Blazer’s illustrative style and eye for caricature. As viewers we are granted extraordinary access to the interviewees personal lives, the results are often comical and touching but above all the experience is intimate.

Urbandictionalry.com indicates that the title of this film is a 1950’s term for kissing in the back of a car. We live in a highly sexualised society, which also places huge emphasis on youth. I have great respect for Liz Blazer for challenging age prejudice by highlighting the importance of sex throughout adulthood. The liberal attitude amongst some of the female interviewees also challenges conservative gender stereotypes.

The choice to include a photograph of each participant at the end of the film makes it clear that the use of animated documentary in this case was not a device for protecting identity. Instead animation is used to inject vibrancy and illustrative flair. Although the likeness is often striking, it is a little strange that the caricatures make each participant look younger than their photographs. I wonder whether this design choice was to protect vanity or maybe it was simply a product of the simplified drawing style.

Occasionally the stiffness of the animation becomes evident; a background figure that dives into a swimming pool does so without bending a limb. Ultimately this is not the emphasis of the film. Blazer is concerned with distilling personality into these simply constructed 2D puppets, and I feel she does so conscientiously and to great effect. 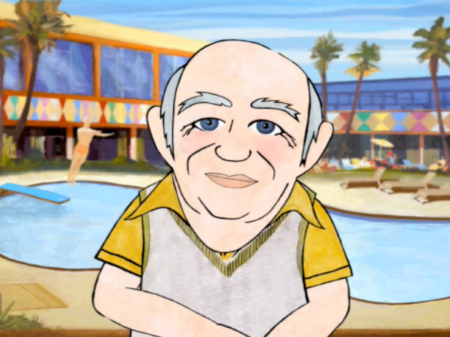 Backseat Bingo’ was a student film made in 2004 at the School of Cinema – Television, University of Southern California.  The film travelled internationally to over 180 film festivals and won 25 awards. The source of this film’s resonance is emphasised when in the final credits Liz Blazer declares her thanks to each of the participants for sharing their ‘wisdom and humour’.