Did you know that the Anidox Lab was involved in the R&D process for the animated documentary Flee?

Here Michelle Kranot gives us some insights into the process of working on animated documentary ideas in the early stages:

“We salute the team of FLEE for their hard work and conviction. ANIDOX are proud to be engaged in the early development of this project, when director Jonas Poher Rasmussen joined our ANIDOX:LAB. We helped him make his first teaser, and ‘matched’ him with the Animation production studio SunCreature. We also followed the process closely and consulted whenever it was useful.

We hope others feel as inspired by this film and as energized as we do – We believe that more filmmakers, artists, journalists and producers will now consider this unique marriage of animation and documentary – and that audiences become more open and curious.

Flee tells the story of Amin Nawabi as he grapples with a painful secret he has kept hidden for 20 years, one that threatens to derail the life he has built for himself and his soon-to-be husband. Winning many awards and accolades including the Sundance Grand Jury Prize, this film has garnered much critical acclaim since its release in 2021.

Told to director Jonas Poher Rasmussen under an alias, we witness the life-threatening, heartbreaking journey undertaken as a child refugee from Afghanistan. The animation is interspersed with archive footage from Afghanistan, punctuating the memories with indexical images; the sequences striking a resemblance to events currently unfolding in Ukraine. This is further heightened by the plight of the refugees trying to find a way through systems to safe places, which in this story took many years. Alongside this is the sub storyline of Amin’s sexual identity and his coming of age as a displaced refugee.

Flee was initially developed as part of AniDox Lab.

The Animation Workshop (home to ANIDOX lab), is for the second year running their new initiative – the ANDOX:VR Award and Exhibition. The Awards include a cash prize and a residency grant for the development of new work.

The 2019 awards included five projects in competition and one project out of competition.

This review will focus on the information available for each project online, usually a trailer and reviews. Unfortunately, I have not experienced the projects as a VR experience yet, due to not being able to attend the festivals the projects have exhibited at. My aim is that the information I provide will be enough to introduce the reader to the project and by following the links, knowledge about where to access the work will be clear. 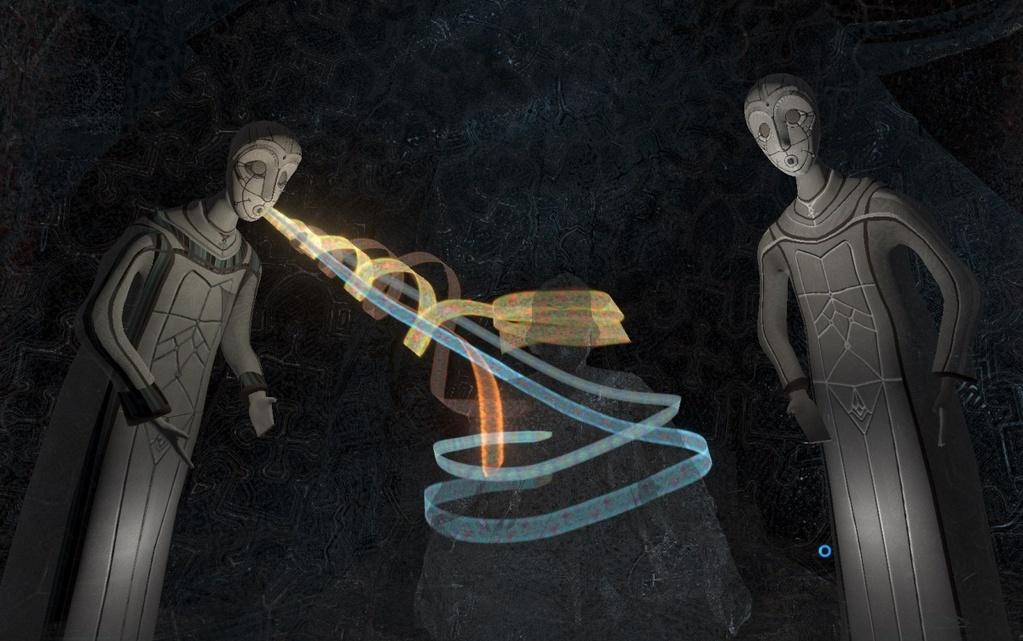 This 18 minute VR film allows participants to immerse themselves in visions triggered by a dose of ayahuasca – a tea made from the leaves and stalks of shrubs found in Brazil and traditionally drunk by ancient Amazonian tribes. The spectator lives through the eyes of the director who has experienced the psychoactive brew.

“Imaginative, architectural and delirious visualizations. More than an imitation of a drug trip, the world presented is a spiritual one. Chants fill the headphones. Snakes slither. And no amount of text we can draft can dig deep enough into the actual experience.”
Review by David Graver on Cool Hunting

‘Homestay’ by Paisley Smith, Jam3 and the NFB Digital Studio (2018)

The trailer for this VR Animated Documentary cuts directly to the dramatic points of the story. This is the tragic story of a Japanese student who stays with a Canadian family; a look at how complete immersion in another culture can create a clash of expectations and change our understanding of family, hospitality, nationality and love.

The user experiences the story through a voice-over by the director, giving an account of her experience. The visuals embrace technological challenges by depicting a paper cut-out and origami aesthetic, created within game engine Unity.

Winner of the ANIDOX:VR 2019 Award for Innovative Storytelling, ‘Another Dream’ is a hybrid animated documentary and VR game bringing to life the gripping, true love story of an Egyptian lesbian couple. Faced with a post-revolution backlash against the LGBTQ community, they escape Cairo to seek asylum and acceptance in the Netherlands. An accompanying installation allows audiences to reflect on what they have seen, heard, and felt in VR.

Another Dream is part of Queer in a time of forced Migration an animated transmedia series that follows the stories of LGBTQ refugees from Egypt, Sudan, and Saudi Arabia across continents and cultures — from the 2011 revolutions in the Middle East and North Africa region, to the world today.

This 360° video immerses the spectator at the core of the Rivonia trial, which took place in South Africa 1963-64. Accused no.1, Nelson Mandela and accused no.2, Sisulu faced a racist and aggressive prosecutor. The defendants used the trial as a political platform against apartheid, at the expense of their freedoms. The original sound archives of the trial form the narrative, with illustrations by Oerd Van Cuijlenborg brought to life.

‘The Scream’ by Sandra Paugam and Charles Ayats (2018)

Winner of the ANIDOX:VR  2019 award for Best Immersive work (€1000). Bringing to life ‘The Scream’ by Edvard Munch, this VR installation enables the user to interact with the painting. The trailer sets a scary tone: set in an empty museum you are invited to touch the painting…beware of what you might unleash.

Songbird is a fairy tale with a dark heart. You will be transported to the island of Kauai in 1984 and into a painted replica of a lush cloud forest filled with colourful birds. Here, you are invited to search for the last known ʻōʻō, an iconic black bird with yellow leg feathers and a beautiful song, a bird whose existence has been threatened to the point of extinction.

Online Submissions are open until 20th July, for the ANIDOX:VR 2020 awards.

The ANIDOX:VR Award is supported by The Animation Workshop/Via University College, Vision Denmark, The European Union, Viborg Kommune, The Danish Film Institute, and the Swedish Film Institute. The exhibition is sponsored by HTC VIVE.