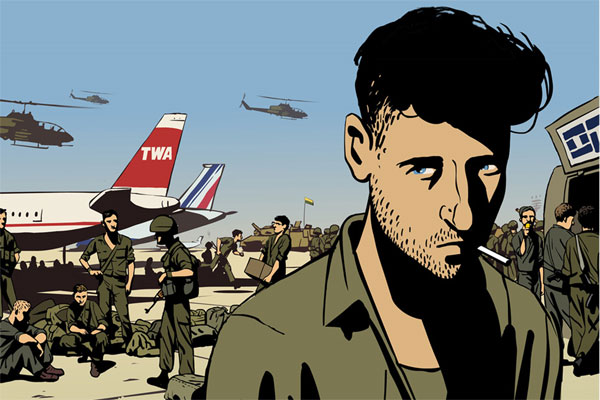 [edit 16th May – this video’s been taken down due to a copyright issue but we’ll let you know if it comes back online.]

“Waltz With Bashir is a documentary film that exists in a rare category (along with films like Close-Up and The House Is Black) in that it bends the generic conventions of its format, ultimately creating an experience that is truly unique. Its idiosyncratic blend of animation, music, and recorded interviews makes it a documentary that is both a sensory spectacle and an emotional journey. In our essay “Echoes of a Forgotten Past” we explore how director Ari Folman uses the seemingly contradictory elements of the animated documentary format to comment on the ethics of filmic representation and the cycle of historical trauma.”

More info here about Digging Deeper “a two man team that likes looking at a film and trying to see if something else is lying beneath its surface.”
https://www.patreon.com/diggingdeeper?ty=h

London International Animation Festival’s Animated Documentary screening returned to the Barbican in London in December 2015, showcasing a diverse selection of animated docs from around the world.

Many films of the selected films did not include any live action elements, and featured voiceovers which were obviously scripted and acted – raising questions about what makes a film a documentary at all. All these films were both presented and received as documentaries, but in many their claim to real world truth rested on trust – there was no ‘evidence’ presented in the film that what we were witnessing was real.

This is an interesting quality of the animated documentary – one which sets it apart from most live action work and which can, when successful, elevate it. This programme of films offered a rich variety of perspectives; not only on the world but on the documentary form itself.

The screening kicked off with Everyone is Waiting for Something to Happen, a mixed-media piece by UK-based animator Emma Calder. Calder’s film used the social media posts of one of her acquaintances to create a portrait of him over the course of a critical time in his life – his cancer diagnosis and treatment. The film offers a light-hearted look at the images we project of ourselves on social media, and the audiences we do not always know we have, who observe these.

Everyone is waiting for something to happen (Official Trailer) from Emma Calder/Pearly Oyster on Vimeo.

The Beast Inside by US filmmaker Drew Christie is a portrait of a homeless young person, determined to live a compassionate, creative and optimistic life in spite of his circumstances. The film is upbeat, with a lively, musical pace, but has moments of deep pathos that make an impact, such as when the protagonist is refused a job at a fast food joint because – he is told – he looks as if he would steal money or scare the customers. The young man’s hurt at the apparent indifference that the general public has towards the fate of those on the street, also provides a moving and memorable perspective.

The Beast Inside from Drew Christie on Vimeo.

Drew Christie’s second film in the programme is Psychedelic Blues, an animated interview with ‘freak folk band’ Holy Modal Rounders which explores their formation and early days. This is a non-stop, acid- and amphetamine-fuelled celebratory rollercoaster of music and absurdity. The characters move fluidly between their old and young selves, caught up in moments that they’d never forget, if only they could remember. The gonzo glory of the memories is tempered by a twinge of sadness, evoked by the fragility in the voice of the ageing, drug-saturated narrator, allowing an openness in terms of how the film can be received.

Baba is a colourful and entertaining short by New Zealand filmmaker Joel Kefali, in which his grandfather describes his experience of arriving in the country as a Turkish immigrant many years before. The film successfully captures the experience and character of an exuberant man, baffled by certain cultural oddities but ultimately filled with humour and joy of life; able to take the world on and adapt to his strange new environment.

BABA from joel kefali on Vimeo.

A Portrait by Greek filmmaker Aristotelis Maragkos is another film about a grandfather, but this one has a very different tone. In this piece, the film-maker’s grandfather is seen from the outside through the memories of his grandson. It is a sensitive portrayal of a complex relationship. The film touches on ugly and violent elements the man’s mysterious past, of which the film-maker only knows fragments – which lead him to fear what potential for darkness may lie inside his own genetic material. This sense of violence is undercut however by the clear love that the narrator has for his grandfather, and the tension between these two perspectives is elegantly brought out in the very short film, making it a moving and memorable work which brought depth to the programme.

Food, by US/China based Siqi Song, is a bizairre and compelling take on the talking heads interview format – in which the talking heads are in fact foodstuffs, discussing their own food choices. A plucked chicken describes its decision to go vegetarian, while a loud-mouthed burger extols the virtues of meat-eating. “I think maybe healthy is overrated” he says, his bun flapping open to reveal a tongue-like slab of meat and cheese as he speaks. The film is comically grotesque and, while the interviews themselves do not tell us anything very new, the delivery certainly makes for compelling viewing which adds a new dimension to the issues discussed.

FOOD from SIQI SONG on Vimeo.

The theme of food was returned to later in the programme with the visceral Canadian production Table D’hote, which combines an attractive illustrative style with repulsive and disturbing imagery, reflecting on the industrial savagery of meat production.

Me and My Moulton is an NFB-supported film by Torill Kove. It tells the story of a young girl growing up in Norway and coming to terms with her unconventional parents and her place in the world. The film takes an unhurried approach to storytelling and paints an engaging picture of this girl’s life and the everyday issues she deals with. It balances humour with nostalgia, conjuring a picture of a childhood world that is, while not untroubled, ultimately safe and filled with love.

Me and My Moulton (Trailer) from National Film Board of Canada on Vimeo.

Ode to Joy by UK-based filmmaker Martin Pickles is a tribute to hugely influential but near-forgotten animator Joy Batchelor, affirming her rightful place in the canon of British Animation.

Elsewhere in the programme another film by Pickles, What is Animation?, is an insightful meditation on the nature of animation wrapped up in a portrait of British Animation legend Bob Godfrey. You can read more about this piece here.

In Last Words by Yuwen Xue, the filmmaker interviews hospice residents at the end of their lives, creating imaginative visual representations to capture these characters, and broadening the scope of the film beyond the individual sounds captured to wider thoughts and feelings. The visuals play experimentally with live action and animation, conjuring a fantastical space between life and somewhere else. Fascinating insights into the artist’s process can be found on Yuwen Xue’s production blog.

Words are again the focus in Arlene, by UK filmmaker Farouq Suleiman. This film is a portrait of a woman who suffers from Aphasia, a brain condition affecting language. Her difficulty with words is expressed with strong visuals including the memorable image of letters of the alphabet falling from a tree like autumn leaves.

Hora, by Israeli filmmaker Yoav Brill, is a longer piece exploring same-sex love in Tel Aviv through reflections on public hand-holding. Interviewees discuss the practice of hand-holding, what it means to them and how the meaning changes when it is observed. There are some truthful and tender insights here, delivered with slick and engaging visuals; making for a film that carries you through smiling.

Still Born, by Swedish filmmaker Asa Sandzen, was the most hard-hitting film in the programme, in which a pregnant woman describes the experience of discovering that her 18-week old foetus has serious heart defect, and making the devastating decision to end the pregnancy. The film does not shelter from the painful process of this, taking the audience through the whole physical and emotional journey of late abortion and delivery. The film is made to feel very real by the small but affecting details that are recalled about the medicalised termination process and the disturbed thought process that takes place in parallel. Ultimately this is a raw and truthful film about the pain of loss, that is as disarming as it is memorable.

Nyosha is the story of a young Jewish girl who becomes fixated on a pair of shoes as the source of her salvation while her life is ripped apart by the Holocaust. Based on the diary and video recordings of Nomi Kapel, one of the young filmmaker’s grandmother, director ‪Liran Kapel and Yael Dekel have employed both stop-motion and traditional 2D animation to render this harrowing tale.

A certain uncanny charm keeps the viewer afloat in the rippling currents of such a dejected context. Despite the truly terrible nature of the historic narrative, naïve optimism is provided by the child’s perspective. The medium also engages us with a toy like simulacra; for better or for worse this buffer dampens the emotional response to the distressing subject matter.

This towering project is impressive but by no means is it flawless. At times the stop-motion is a tad jerky, the models still have their flash lines and the illusion of scale is not fully realised. That said these are the imperfections that come hand in hand with such a challenging medium: an Aardman production, for example, would be missing a great deal if all thumbprints were removed. Set design on Nyosha is impressive and at times the lighting is too. Particular attention has been paid to attempting tricky post-production effects, like the beams of light that cut through the forest. Despite not always being entirely convincing, the over all atmosphere these create is invaluable.

You can watch a making-of film here:

Nyosha – Behind The Scenes! from liran kapel on Vimeo. 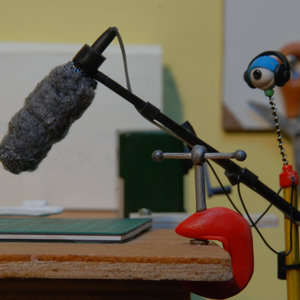 Another from the Vimeo doco-anim channel, specifically chosen as its subject centres on the life and work of being an animator. We do however disagree with the interviewees statement about Caroline Leaf!

‘Two young pencils document four Israeli animation icons. They confront them with questions, film and record every word, story or argument and by that try to comprehend the existence they once shared and the insights they still share (or are divided upon) about contemporary animation and creation in Israel.
This film was made in “Bezalel academy of art and design” in Jerusalem using stop-motion animation.’ Are there more animated docs on adultery out there?

A very personal Animated Documentary piece depicting my Mother’s thoughts on my parents’ divorce
Originally released as part of a Documentary project called “Drawing the Line”
created at Sapir Academic College
Director Tom Kless had this to say: It is always heartwarming to feel that people can connect to and are moved by a very personal creation of mine. I view documentary filmmaking and especially animation as a fantastic way to undergo a personal theraputic process. I am currently working on my next animated documentary film, which deals with father and son relationships in my family over the course of 3 generations.