Florian Maubach documents his bicycle journey from Kassel, Germany, to the coast of Lithuania. In one minute twenty Maubach convinces us of his reverence for landscape, passion for adventure and artistic dynamism. 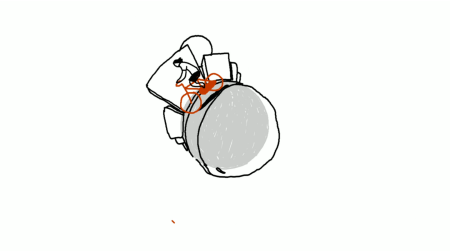 The viewer adopts a satellite perspective while the surroundings immediately visible to the cyclist distort into a miniature globe. This frenetically changing sphere helps communicate the joy associated with propelling ones self across great distances.

Further definition is added to his activities and various modes of transport through clear and simple sound design, avoiding the use of a narrator. For instance, his passage through the town of Palanga is punctuated by both the name appearing briefly across the skyline and a ringing of his bell. The visual emphasis placed on the movement of the sun and the moon helps abbreviate the passage of time in this very short film.

In the final moments Maubach breaches the realism of his constructed universe by having the character jump up from the sea, cling on to the sun, plunging the world into darkness. It might be fair for one to assume this is a playful metaphor gesturing the traveller’s triumph over nature.  While this decision reduces the film’s authority as a descriptive document, its location at the very end minimises such an effect. As credits are bound to break all cinematic illusions, this filmmaker seems to have recognised an opportunity for conceptual freedom in the seconds beforehand.

The 2012 student film, made at Kunsthochschule in Kassel, has screened at 14 festivals across Germany and the rest of Europe. I found the cheerful simplicity of concept and execution in this film resonant and refreshing.