Unfortunately we cannot embed the film ‘No-One is Illegal’.  It can however be watched via George Sander-Jackson’s blog.

Inspired by a performance of the ‘Asylum Monologues’, Sander-Jackson approached the writers for permission to adapt the play into a shot animated film. The narrative addresses mental anguish, firstly in regards to the atrocities that motivated the narrator to flee their homeland and secondly in regards to their experience of detention while seeking asylum in the UK. Forward Maisokwadzo, a Zimbabwean resident of Bristol, provided the voiceover while Sander-Jackson constructed the animated visuals through an ink-on-board technique. 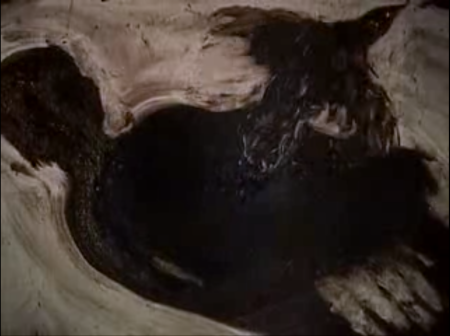 Possibly due to similarities in their process, parallels can be drawn between this film and the charcoal animations of William Kentridge. In addition to the dank grey-scale palette that both artists adopt, the style of visual storytelling is metamorphic; a stream of pictorial references merging from one to the next. The sequential blurring of nightmarish scenes evokes the haunting and intangible nature of traumatic memory.

The film seems to exist in two forms; three minutes (available on George’s blog) and a one-minute-thirty version which can be found in DepicT!’s 2008 archive. This is the Watershed’s super-short filmmaking competition that operates as a part of Bristol’s Encounters Short Film & Animation Festival.

Sander-Jackson continued to develop the technique he used in ‘No-One is Illegal’ for a section of the feature film ‘A Liar’s Autobiography’, which I reviewed for this blog back in March 2013. George Sander-Jackson works as a director at Arthur Cox and teaches part time at the University of the West of England, Bristol.