Jess Iglehart evokes the saturated vibrancy and graphic language of early nineties television to aid in the illustration of this rock and roll anecdote.

Matt Pinfield, the MTV host, recalls an encounter with a sheriff of Aberdeen, a small town in Washington State. Pinfield recounts the cop explaining a claim to fame by digging out a mug shot of two of the members of Nirvana, Kurt Cobain and Krist Novoselic, who were arrested in the town as teenagers for doing graffiti.

Pinfield’s resonant voice and enthusiasm for music mythology is infectious. This story, despite appearing a little frivolous, holds great currency in the sphere of popular culture. Most significantly we are offered a glimpse into Kurt Cobain’s youth, nine years before the tragic figure ended his own life. Pinfield and Iglehart expose a more naïve time for the bandmates; a time of boyish misdemeanours and rude illustrations. 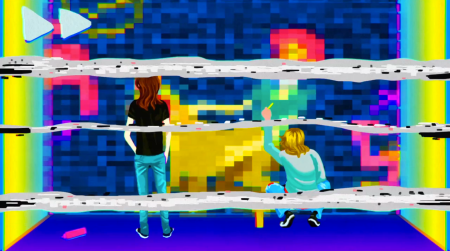 Jess Iglehart echoes the counter culture tone of Nirvana’s music with a playful mocking of the authority figures in the story; throbbing donuts are depicted behind the sheriff as he talks, and Iglehart implies that the cops had nothing better to do in the small town than paint their nails. While I am sure Iglehart had no intention for this film to be recognised as an objective document, there are clear prejudices in the material. Although these comments on the police are valuable for their humour, they are also transparent in their exaggeration and distort the viewer’s experience of Pinfield’s account. 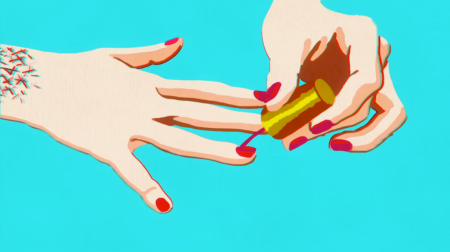 The animation’s colour palette creates a great sense of nostalgia. This is further augmented by the simulated effect of a VHS tape being fast-forwarded and Iglehart’s decision to adopt the font used in the band’s logo for the place names on the map of Washington State.

Commissioned by MTV, this short is one of a series based on Matt Pinfield’s Rock Stories.  Jess Iglehart is a Los Angeles based animator & illustrator currently in his fourth year at Cal Arts in the Experimental Animation programme.