This is a story constructed from second-hand accounts of a phenomenal occurrence where a trapped whale seemed to express gratitude to its rescuers. The true account is condensed into the narrative of a single fisherman’s efforts to free the entangled creature.

Scenes are painted and repainted on a wall in Seattle’s Cal Anderson Park. Most noticeably this technique restricts motion; carefully composed images are constructed and then adjusted. A second feature is the presence of residual marks, also noticeable in the works of animators such as William Kentridge and Blu.

This is where an image is adjusted rather than replaced and attempts are made to mask previous drawing, although this is never fully erased. As a result the filmmaker must embrace, accept or incorporate the traces left behind. Particularly interesting marks are created when water is used, presumably to wash away previous layers of paint, resulting in a dilution and dribbling effect,suggesting an underwater environment. 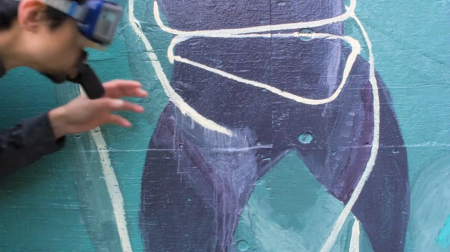 The film is filled with broken illusions; a pixillated actor gestures swimming while mounted on top of a stepladder. Our disbelief is suspended by a mere thread, but half of the charm of this film is the inclusion of such mechanisms. Unlike some more technically complex animations, here we are provided with evidence as to how the scenes were constructed. For example, we are made aware of the filmmaker’s surroundings where the grass and the unpainted wall are visible at the edge of the frame.

Tess Martin draws attention to the frame presumably because she felt process was as important as narrative. This is further indicated by the choice to include a link to a making-of time lapse film.

Some of the Vimeo user comments below the film refer to the sound as distracting. Personally I enjoyed the disrupted patterns of speech. This is an interesting device for editing down what must have been a much longer account. The film was based on the Radiolab Podcast ‘Animal Minds’. It was a public art project commissioned by Sound Transit’s STart program in association with Seattle Experimental Animation Team.

One thought on “‘The Whale Story’ by Tess Martin”